For purists, hunting in flooded timber has long been the pinnacle of mallard hunting. While flooded timber is commonly found in the green-timber bottoms of Arkansas, things change during an El Niño when ample rain brings flashes of opportunity to areas further west and to the north. That’s why duck hunters who frequent public lands, where a flood brings more dirty water hunting habitat, pray for rain.

In the last decade we’ve had several El Niño events in the Central Flyway. The heavy autumn rains bring river and lake levels to a maximum. Lakes and rivers then spill into backwaters that are dotted with heavy summer wetland growth and forages that are not normally flooded. When the floods come, so do the ducks.

When more rain falls during the mallard migrations, you better have done your homework checking vegetation growth at nearby wildlife management areas and lakes. Studying the habitat and studying the water isn’t rocket science; but if you don’t put in the legwork, you won’t be on top of these rare events.

This year, lightning struck twice. We had an early rain in December that flooded the waters in Oklahoma and some of the neighboring states. This made hundreds of acres of dirty water during the height of duck season, with mallards crawling into the far corners of places that are rarely flooded or hunted. Through the treetops they came. And it was the same story at every lake with backwater for miles; plenty of water and plenty of ducks to go around for those in the know.

After the initial deluge, the waters receded for several weeks and so did the ducks, back into different patterns and back into the dry feed fields. The second round of flooding struck in the heart of winter. Lows in the teens and big north winds accompanied big flooding, again.

This time, things got right and the ducks came from the heavens. On the first day of sunshine, a brisk wind was blowing from the northwest at 20 mph. The ducks were coming in waves and the echoes of gunshots ripped through thousands of acres of flash flooding bottom ground. With only a few boats and hunters with inside knowledge of the phenomenon; everyone had a hot piece of the pie.

I’ve been hunting the same patch of woods filled with oaks and hackberries for the past decade and have only seen this event a handful of times. 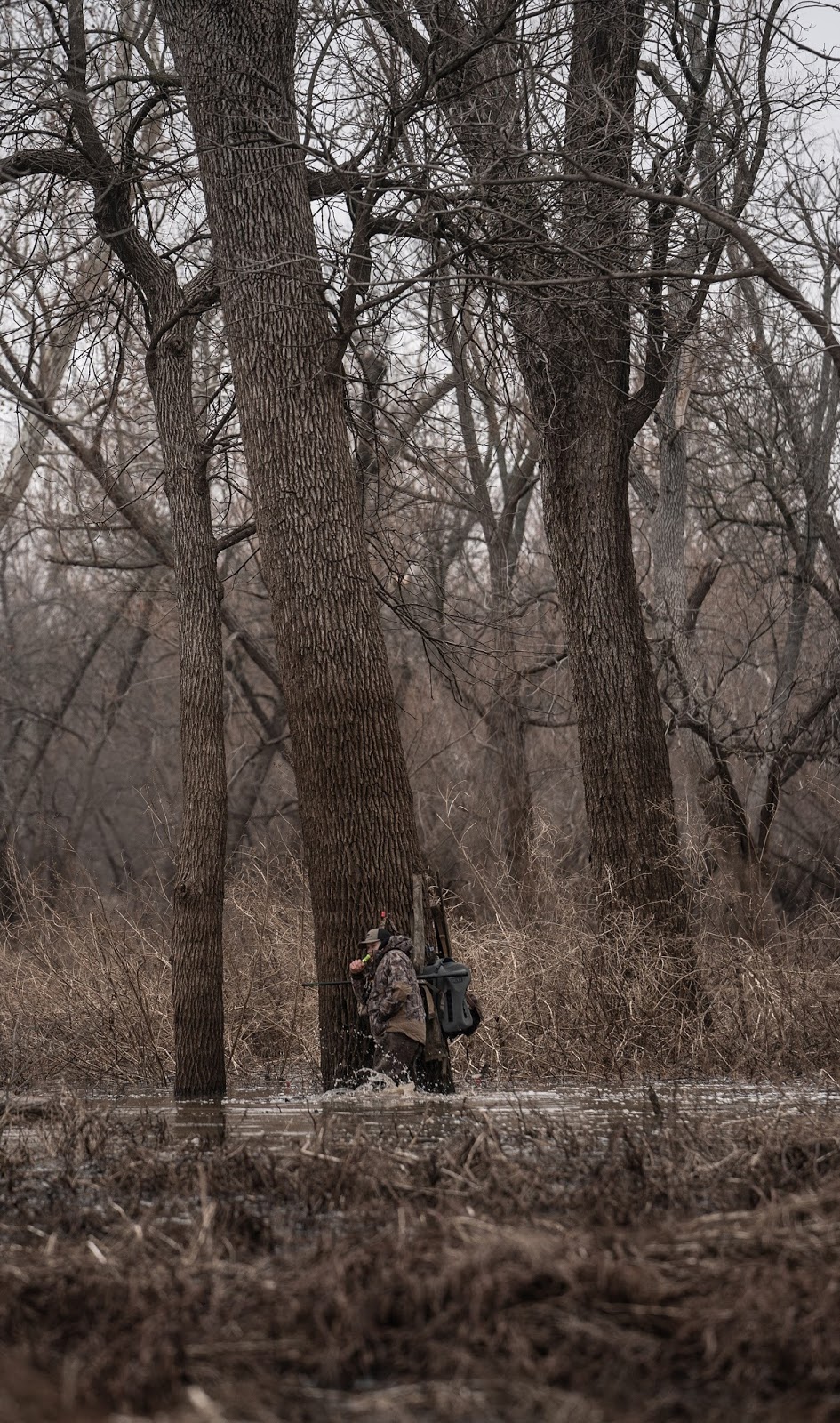 This second round of flooding brought legendary mornings and one legendary evening. When there’s a flash flood, the water is up there for five to seven days at the most before the lake levels drop and the ducks are gone. One group went in the boat in the morning and another group went in the evening, on the same tree and the same spot.

Some may call this blowing out a hole, but it’s hardly the case. For one, the ducks are migrating and moving to the bottoms because they know there is a flood. It’s been ingrained in their genetics over centuries of migration; it’s what they do. Second, they will be gone just as fast as they showed up, so you’re not blowing anything out.

The kicker on this gig was not in the place, it was what was in the water. These woods had had ample summer growth and with that comes an abundance of smartweed and other vegetation. There were thousands of ducks burrowing into dirty backwater so thick that in some cases we couldn’t walk through it. The patch of woods we hunted was the only open hole leading to several hundred acres of “gunga” as we like to call it. A cross between jungle and gumbo vegetation no “sick for it” duck hunter would even consider walking through. 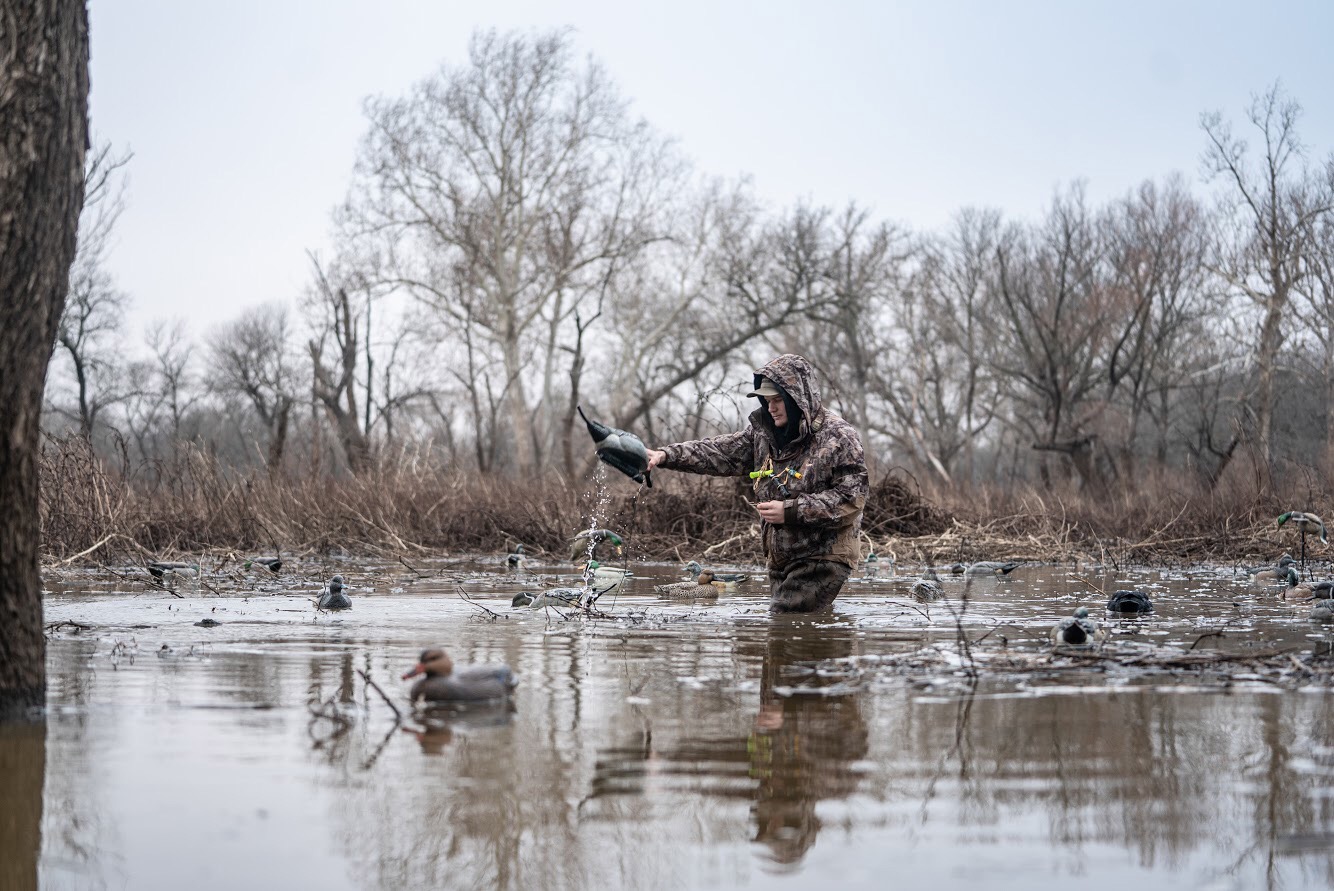 We set out eight spinners. Hate all you want, but you couldn’t have killed a duck in this wooly stuff without it. Just take two jerk cords, two dozen decoys, and blow your calls to sound like a refuge of feeding ducks. It is truly a frenzy.

And just as fast as it comes in, it goes away.