It all started when my college classes switched to online because of coronavirus and I knew this year was an opportunity to point my wheels west to chase those elusive, bugling bull elk. After spending the majority of the summer e-scouting on google earth it was time to put our scouting to the test. We were in elk every single day for the first 5 days but just couldn’t find one that was fired up an bugling. We packed up camp and headed an hour North and boy what a good idea that was. As we headed up the mountain that morning we knew it was going to happen. The canyon sounded like Jurassic Park with all of the growling screams coming from inside of it. After only a few hundred yards we found ourselves absolutely surrounded by bugling rutting bulls. They were literally running circles around us in the thick oak brush. Within 10 minutes we had 3 different bulls all within 20 yards it was only a matter of time before one of them messed up. After drawing back and letting down multiple times trying to get a shot it was time to try something. I ripped off a challenge bugle and it sounded like the woods were falling apart as I head horns coming through the brush straight down the mountain. It was only a matter of seconds before the 5x5 was right on top of us where he met my arrow at 7 yards. It was truly a morning dreams are made of and it was all captured on film. Thanks to our natural gear we were never busted one time throughout the whole hunt and the bulls continued to bugle all around us even as we skinned my elk. It was a sight to see. 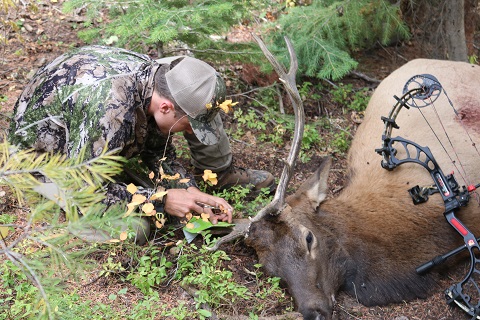 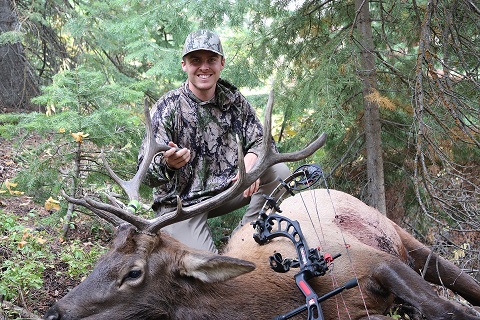